The theme of Noche de Gala 2009 was a Venetian Masquerade ball. With around 1,000 guests this was an adventurous party to organize, but with the help of Keith Watson Productions the Foundation pulled it off with style. 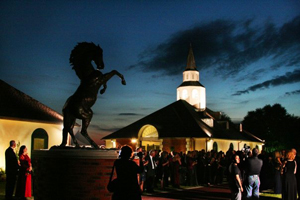 Bonnie Seide and I were VIP guests of The Gainesville Sun, so we started the night at their office by stepping into a limousine and being treated like queens by Chris from AP Limo.  (Thank you Patti Alvarado & Deana!)

We were whisked off to the spectacular estate of The Leon Family; a 642-acre they call the Besilu Collection located in Micanopy, Florida.  This is a breathtaking example of an equestrian estate, able to house 120 horses.  The Leon Family was very generous to donate this location for the party.

The limo rolled through the gate and past rolling hills to the main pavilion for the party.  There were large and small tents put up to house the party, the caterers, the silent auction, and all the dressing rooms for the dancers and actors – it was quite a display!

They had literally rolled out the red carpet, and set a mood of splendor for the entire night.

We were greeted by Valets to help us out of the car in our gowns, and led us to the guest photo area and registration desks.  I’m anticipating the official guest photos when they come out, and have been checking the website daily.

Jesters and Dancers met us on the red carpet, dancing and playing.  A constant flow of servers moved through the crowd with appetizers making sure everyone was take care of.  In addition to that there were several bars throughout the party grounds so that all 1,000 guests were fully refreshed at all times.

Video of the Evening

There was an entire tent dedicated to house the auction items, and the community was generous enough that it was filled to the brim.  Here is a link to the list of items, don’t get too jealous if you missed out on something!  There were many paintings and posters, a wide selection of wine, and many certificates to local businesses just to name a few categories.

Before dinner we were treated to an orchestra and a Champion Paso Fino horse show. 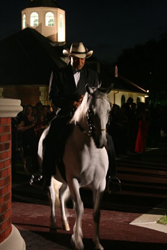 The stables were open for inspection, and the horses were beautiful and gentle.  Besilu Collection is known for their world-class animals, and the crowd was impressed.

The court jesters and actors increased in numbers throughout the night, entertaining guests with their antics.

Hand-rolled cigars were passed out through the crowd, and the live cigar rolling was educational and unique.

Vocalists in the main tent; photo by Steven J. Aner

The main tent was massive; large enough to hold more than the 1,000 guests and a stage.  It was probably 4o’ tall at the peak, and decorated with hanging chandeliers, golden table cloths, and many masks.  The dining room seemed like a fairy tale ballroom.

Caccitore Catering presented a beautiful & tasty spread for dinner.  Everything was mouth-watering, but the desserts were exceptional!

A Night at the Opera

Ted Keenan as The Phantom; photo by Steven J. Aner

The theme of the evening was Phantom of the Opera. The opera began with Rhonda Tinnin entering the tent on horseback.  This is a lady that knows how to make an entrance!

Ted Keegan was the star of the night as the male lead.  This was such a treat because Mr. Keegan recently starred in the National Tour of The Phantom of the Opera, after a run in the Broadway Company!  He generously donated his time in support of the Sebastian Ferraro Foundation. Roberta Watson sang opposite to Mr. Keegan in the Phantom of the Opera.

There were also several local and regional vocal and dance groups involved including: Members of The Dance Program at Santa Fe College, The Vocal Ensemble of PK Younge Performing Arts, and New Century Dance Company.

the guests were invited to dance the night away.

As with any ball we all had to make it hope before midnight, or our carriage would turn back into a pumpkin… so we called for our driver at 11:30 and said goodbye to a magnificent evening and made our ways home.  I am already looking forward to next year…

If you have photos from the evening to share please post a link in the comments below, we would love to see them! 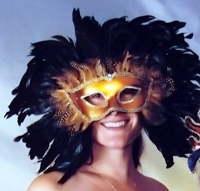 I am driven by my curiosity. People tend to call me adventurous or brave, but I just like experiencing something new. I explore. I am a perfectionist. I plan and organize. I build things. I dream up crazy new designs, or make stuff easier and better. I listen, or rather hear, and use that to make your life a little better. call or text me at (352) 373-0032 View all posts by Kathleen Seide »

Feel free to contact us using any of the options below.  We've included a quick contact form for your convenience as well.  We look forward to assisting you.

Learn more about Seide Realty or contact us below...