Avoiding the Pitfalls of Synthetic Stucco

What is Synthetic Stucco and Why Should You Care?

Traditional stucco is made with Portland cement. Synthetic stucco is polymer based and often includes a layer of foam plastic insulation.

There are many stucco homes in Haile Plantation. In fact, stucco homes are a common sight throughout Florida and other parts of the United States.
Many stucco homes, however, are not traditional stucco but are synthetic stucco, also known as EIFS.

What is EIFS? The simplest explanation I could find comes from an article about synthetic stucco on about.com:

“EIFS stands for Exterior Insulation and Finish Systems. The product is also called synthetic stucco, and refers to a multi-layered exterior finish that’s been used in European construction since shortly after World War II, when contractors found it to be a good repair choice for buildings damaged during the war. The majority of repairs to European buildings were to structures constructed of stone, concrete, brick, or other similar, durable materials.”

In addition to Dryvit, EIFS manufacturers now include Acrocrete (BASF), Parex, and Sto.

Synthetic stucco/EIFS was designed as a “barrier system,” meaning that its success is dependent upon no moisture ever getting into the building envelope. To remain completely moisture free, all construction steps have to be followed, all flashings have to be properly installed, all windows and doors have to be properly caulked, etc. According to the International Risk Management Institute Inc. (IRMI),

“the properties of the product that make it a good insulator (designed to keep air from moving from the inside to the outside) also make it a poor drainer/ventilator (does not allow water that gets in to get back out).”

Water and Wood is a Bad Combination 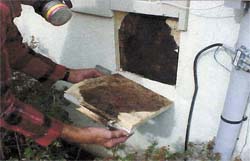 In the mid-1990’s, 209 EIFS homes in Wilmington, NC were discovered to have chronic moisture problems, resulting in serious mold and structural issues. According to an article on EIFS by Florida Master Home Inspectors,

“the damage was caused by poor construction detailing and practices; principally, the omission or proper installation of flashing in violation of minimum standards of construction set forth in building codes.”

Draining away the Moisture

In 1997 drainable EIFS was introduced into the market by EIFS manufacturers. Drainable EIFS systems give moisture that gets behind the cladding a way to escape, greatly lessening the potential for structural and mold problems in synthetic stucco homes.

Despite the introduction of drainable EIFS, many builders continue to use the barrier system type of EIFS. According to Florida Master Home Inspectors, it is estimated that 95% of synthetic stucco homes in the United States are of the barrier EIFS variety.

“From an insurance standpoint, finding coverage for homes built using EIFS can be quite difficult. The product is highly susceptible to moisture and if not properly maintained, homeowners could find themselves with mold issues, which is the primary area of concern for insurance providers,” says Bryan Williams, an insurance advisor with McGriff-Williams Insurance in Gainesville.

Like any other type of home, regular inspection and maintenance of synthetic stucco homes is necessary to protect your investment and to help prevent problems.

A thorough inspection of the home’s exterior by a structural engineer or certified EIFS inspector will help the homeowner to determine which type of EIFS system is used on the home, whether there are currently water intrusion problems, and what steps homeowners should take to maintain their home.

The Exterior Design Institute maintains a  list of qualified EIFS inspectors by state. at www.exterior-design-inst.com. According to its website,

“The Exterior Design Institute is a non-profit organization founded for the purpose of training and certifying Building Envelope and EIFS Inspectors and Moisture Analysts to promote quality control within the construction industry.”

Repairs to synthetic stucco homes should be performed by contractors well-versed in the use, maintenance, and application of EIFS.

Gary W. Jackson, a North Carolina attorney who deals with cases involving construction defects, suggested the following tips for homebuyers considering the purchase of a synthetic stucco home in a 2004 article in REALTOR ® Magazine:

Insist on obtaining all relevant, available information about a stucco home from the seller: o Is the system traditional stucco or is it EIFS? o Have repairs been performed? o Have moisture readings or other inspections been conducted? Obtain an EIFS inspection on the home (in addition to a regular home inspection).

More information on homes built with synthetic stucco/EIFS can be obtained by contacting the National Association of Home Builders Research Center at 800-898-2842.