4th of July Fireworks in Alachua

The 2009 4th of July celebration was a blast (he, he)!  I would recommend heading there next year, especially if Gainesville starts a tradition of no fireworks.

Corner of 235-A and Peggy Road

Slightly edited to remove the boring wait time between explosions.

On my way to the fairgrounds I found a large group parking near a pasture along CR 253-A so I joined them.  The view promised to be excellent, with this wide open vista in front of us. 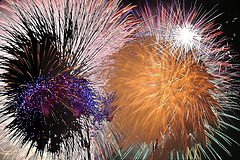 As it turns out, 235-A isn’t a great place to watch the fireworks – the explosions are too low and there is a hill that blocks most of them.  I drove around to find a better place and ended up at the corner or Peggy Road and 235-A, which is where this video was taken.  I did get to drive RIGHT UNDER the fireworks in my quest – very cool, the whole car was shaking!

Also – While everyone waited people got antsy and one couple had a spat that was almost a splat!  The woman drove off and almost fish-tailed into a parked truck.  Scary since there were so many people around.

So, next year I’ll be at the actual fair grounds…